The Story of the Mormon Church in Iceland. I helped in a small way with the publication of an academic book chronicaling the history of the Church of Jesus Christ of Latter-day Saints (or the Mormons) in Iceland. A number of religions have had a major role in the history of religious movements during the more than 1000 years that Icelanders have been there. I helped translate a number of the old journal texts and letters from the original Icelandic into English for the English edition of the book. I also translated an old missionary tract that ended up being Appendix 2 in the English version. The book was first written in English and then translated into Icelandic for use by Icelandic academics (and others) who were making a study of

religion in Iceland in its history. The University of Iceland Press published the book in Icelandic.

The book is called, Fire on Ice: The Story of Icelandic Latter-day Saints at Home and Abroad (2005, Religious Studies Center, Brigham Young University, ISBN 084252617X / ISBN 9780842526173). The author of the book, Fred Woods, is a Brigham Young University professor of LDS Church History and Doctrine, an author specializing in Mormon migration and currently holds the Richard L. Evans chair of Religious Understanding at BYU.

Fred and I became friends when my wife and I moved into the same married housing complex at BYU back in 1987. I was considering becoming a religious professor at the time as well, so he and I became friends and spent some time together over the two or so years that I was there. It was about a year after I returned home from Iceland after having served as a missionary.

Fred and I talk quite a bit still since I helped him with his book in 2005 and we both work at BYU now. He called me yesterday and was asking me a number of questions about the recent publishing of the book into Icelan 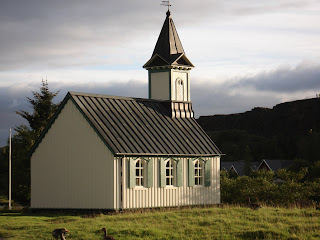 dic and about my contacts in Iceland who are now buying it from the University of Iceland Press who published it. During our conversation, Fred was telling me about the trip to Iceland he is taking in five weeks to speak and lecture at the University of Iceland in the Religious History department. He was describing the additional immigration research he hoped to get done while there at the University of Iceland library as well as about the plans he had to go out into the country and interview people about their knowledge about who the Mormons really were. Most of what people think they know about us even today seems to be connected with Halldor Laxness's book Paradísarheimt. I told him that I wished I could go with him since he speaks no Icelandic and I know my way around pretty well. Of course he doesn't need Icelandic to get around at all, but his plans coincided well with things I would like to do while there.

Well, to make a long story short, I just might be going. I could help him with his research and be with him at the University of Iceland when he lectures and lend an 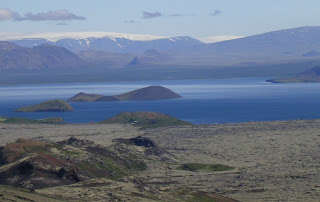 additional bit of professionalism to his trip since I am a BYU employee as well, but one who speaks Icelandic and has lived in Iceland for two years. I'll keep you updated. If I do go, we plan to take the hringbraut trip around the island and to do research in all the small towns and interview people along the way. I've never been on the hringbraut east of Akureyri in the north or east of Vík in the south. And I'll have a digital camera this time to take all the pictures I ever wanted, though early March isn't the prettiest time of year there....

And who knows what we might see while there.
Posted by Darron at 7:57 PM

I am LDS. My mother's doctor's wife is Icelandic. He is Swedish. The doctor visited SLC Temple Square and questioned whether or not the Icelandic/Danish sculptor, Albert Bertel Thorvaldsen, is given obvious credit in our visitor centers on the LDS copies of the Christus statue that he carved. I don't have an answer for him. I don't ever recall Thorvaldsen's name being attached to the statue. This gentleman took it as a slight to the sculptor. I can see how he might feel that way. It would be like someone else printing the Book of Mormon and totally leaving out the fact that Joseph Smith translated it. I called Temple Square and the woman who answered confirmed that the Christus statue (copied by Italian sculptors) does not have Thorvaldsen's name on it. Church leaders need to know there are some Scandinavians who would like this major oversight addressed.
Thanks!
Eric

Samuel Bradshaw said...
This comment has been removed by the author.
12:06 AM

I couldn't find an email link anywhere so I'm posting as a comment – do you have access to an Icelandic hymnbook and could get me information about hymns #48, 83, 84, 107, and 115? I need to know the author and composer names and related scriptures... If you could scan the pages, that would be great!

What I have so far for the Icelandic hymnbook is here:
http://singpraises.net/hymnbooks.27
It will also be used in future versions of the church's official LDS Music app!

My email address is samuel@singpraises.net.
Thank you so much if you are able to help!