Two missionaries. When Elders Christianson, Benson and I arrived in Iceland to be missionaries in September of 1984, there were seven missionaries on the island at the time. We made the number 10 for a few months. I got put with Elder Dale Tanner to begin with as I have mentioned before. It is common for our "trainers" to spend a few weeks to a few months teaching us everything they know and how to catch on in the language as fast as possible.

I remember going to the bank one day though with Elder Ed Hunt who was from Farmington, New Mexico. I only got about four photos of him total in the few months he was still in Iceland after I arrived. I really like this one that I just got converted from a slide that was 23 years old. We were in a Reykjavík bank exchanging U.S. dollars for Icelandic Crowns (or Kronur). Something about this with Elder Hunt on the right and the Icelandic woman doing some bank paperwork made me think of the James Bond movies I had seen as a teenager before going on a mission for my church. Some of you may recognize this bank. Which is it? I can't remember. We did go in though about once a month to change dollars into kronur. There was one specific woman who would often be at the counter when we went in to exchange our money. She was very efficient and polite. We happened to knock on her door one day after I had been in Iceland only a few weeks. My trainer spoke to her for a few minutes and then she invited us in. I was new enough that I only caught a few words here and there, but Elder Tanner caught everything. The woman was a little too friendly with us (from what Elder Tanner said later) so we didn't stay long. I've always thought this was a cool, 007 kind of picture.

This next picture is of Elder Hunt again with my training center companions, Elder Benson and Elder Christianson. The picture was taken on Christmas Eve 1984 as I recall. We had tried to get into Landakotskirkju for the midnight mass, but there were so many people we didn't have much luck. We stood at the back of the church for about twenty minutes crammed in with loads of others and then went out into the kirkjugarðinn where I took this picture without a flash. I didn't really understand the intricacies of photography but wanted to have some kind of record of the things I was experiencing, so I brought my Canon AL-1 with me. Elder Hunt still lives in New Mexico and works for FedEx.

The second of the two missionaries who are the focus of this entry arrived in Iceland with Elder Hunt. His name is Neil Taggart from Phoenix, Arizona (at left in this next picture). 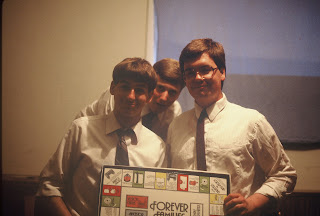 They had been in the missionary training center together. I never worked with him personally while I was there, but I have always wondered what happened to him and where he was today. Elder Hunt told me when I tracked him down that he had run into Elder Taggart once and that he was living in Scotsdale last he knew. The two of them were in Iceland for about a year with us before they went home.

Wondering about people like Elder Taggart is like wondering what happened to people you knew in high school that you haven't seen for a long time--except that the work we did in Iceland teaching the gospel was completely different than the things high school friends spend time doing, so the bond is somewhat different. There have only been about 155 men ever serve as missionaries in Iceland for the LDS (or Mormon) church. We are a tight-knit bunch for the most part. Any of you know this Neil Taggart and his whereabouts. Ég get ekki fundið hann….
Posted by Darron at 11:10 PM