I brought my mission journal on the trip with me, and read the entire thing from cover to cover in the days before the trip. Twenty two years ago today, Steve and I had a baptism. Brother Emil Þór Emilsson, who now lives in Utah with his family, joined the church, and his family eventually followed. I need to call him when I get home, and share all these wonderful experiences with him. Bróðir Emil lives in Cedar Hills Utah, and does a bit of offroad racing. See his business at www.icelandoffroad.com

Today was fantastic. After breakfast, we drove to the church to meet with the Elders, and cook lunch for them. I made some Penne Carbonara with Italian Garlic Bread, Salad and Fresh Fruit. It was good. I also made some hángijöt on flatbrauð and fiskibolur. I was shocked to find out that several of the elders had nver had either of them, and did not even know what it was. It is surely a sign of how things have changed for the Elders. They now live on frozen pizzas and other such foods that were not available 21 years ago. I remeber eating fishballs at least once a week. 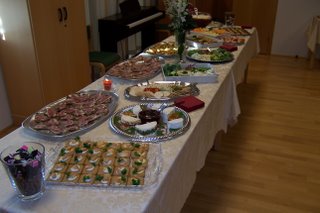 At 7PM, 'Fire on Ice' was to be shown at church. For some it would be their first opportunity to see this powerful film. I spent the day preparing some nice horsd´oeuvres and finger foods. Very simple. Very nice. Used smoked Ýsa, Hángikjöt, shrimp and rugbrauð..all my favorites. We had left word with President Grimsson´s office (President of Iceland) about the screening of the movie. We were told that he was out of town, but the message would get to him.

Just a few minutes before the start of the movie, up pulls the Presidential Limo, in front of the church....WOW! After the film was over, Sister Gíslasson stood to address those assembled. Our jaws hit the floor, when the first few sentences out of her were in Icelandic. We always knew how hard it was for her to do. She loves these people though, just like Byron did. She talked about Byron, and how proud he would have been to see the building and the people. After Melva, Gummí asked Preseident Grimsson to say a few words. He started in Icelandic, and finished in English. He spoke of his great love and admiration for both President Hinckley, whom he had met several times previously and Byron.

So many members showed up for the film. It was so good to see everyone again. The years melted away as we spent an enjoyable evening, just getting reacquainted. It was very special to have Dan and Dave Gíslasson there as well. These are fine men. They have so much of Byron in them. They have likewise inherited their dad´s love for these people, and this special work.

An amazing thing happened to me today, much the same way it happened 22 years ago. I had been very tentative about speaking. It just didn´t sound right, coming out of my mouth...until the members starting showing up for the movie. All of the sudden, the little box in my head that contains my Icelandic opened up. Not only did I understand what was being said, I WANTED to respond, and could feel my brain racing ahead to calculate responses in Icelandic. I truely feel blessed that this gift was returned to me for this special trip. I love these people, and want so much to be understood while I am here...
Posted by Dale T. at 7:48 PM No comments:

From my Journal, 5 Maí 2006
Just an indescribable day today! It all started with a wonderful breakfast in the hotel of smoked salmon, skýr, biekon, caviar, kokomjólk, o.s.v....We met Gummi at his apartment, and headed out on the Golden Circle tour of Gullfoss, Geysir and Þingvellir.

Guðmundur works for one of the tour companies here in Reykjavík, and was able to share with us many stories about what we were seeing. Much information that I never heard as a missionary. Stopped at Gullfoss for a quick lunch of Soup, fresh bread and malt...mmmmmm! On the way home we stopped to see Margrét Annie. It was so great to see her again. She always was so kind to us as missionaries. Found out that her dad passed away a few years previous. Margrét is in her 40´s now, but the years have been kind to her, as you can see in this picture.

Her daughter Melanie has two small children, making Margrét a grandmother...my, how time flies. From there, we tried to stop and see Víðir and Klara, but they were not home. We traveled on to Sister Sveinbjörg´s house, out in Hveragerði. I can´t tell you how wonderful it was to see her. As Davíð Gíslasson said, 'when I think of Iceland, I think of Sveinbjörg'.... 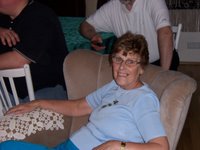 Throught most of the day, President Guðmundur sat in the back of the car, and made phone calls, inviting people to the next day´s screeening of Steve´s movie, 'Fire on Ice'. 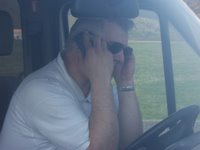 After our trip, we stopped back at Gummi´s, and picked up Valla and the girls for dinner. Gummi has two daughters left at home, Rebekka Rán, and Regína Ösp. They are both wonderful young women. Rebekka is 17, and Regína is 14.

Rakell Mjöll lives out in Garðabæ, and we saw her several times during the trip. I have fond memories of sitting on the floor playing with an infant Rakell. She is a beautiful, talented and sensitive young woman, who will do many great things in her life. We went to a Chinese Restaurant with the girls, and had alot of fun. There were NEVER restaurants like this when we were here. The food was mediocre, but the company was super. I love Gummi and Valla.
Posted by Dale T. at 8:50 AM No comments:

Steve Andersen ('83-85) and I visited Iceland and Denmark recently in conjunction with the showing of Fire on Ice to the saints in Iceland. It was a wonderful trip, and a great opportunity to reconnect with old friends. I encourage all of you who read this, to reestablish your ties with the friends you made while serving in Iceland. This "Blog" will serve as a vehicle for all of us to get reconnected with each other, and the Saints we love so much. Please visit www.icelandmission.com and get registered. Steve and I both have the most recent copy of the Branch Directory. Call us or send an email if you need to find someone. We will be happy to help.
Dale Tanner.

Here are some pictures from the trip. Melva Geslison and the twins, Dave and Dan, were also there while we were there. 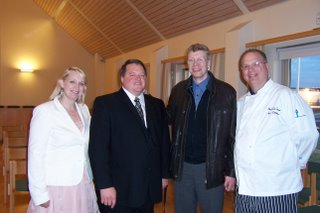