I spent the winter of 1985-86 in Akureyri in the north of Iceland as a missionary. I had two different companions during that winter, Joe Holt and Michael Miller. I don't recall who I was with at the time, but I remember going into the library there in Akureyri one day during that winter. I don't know if we were just trying to get warm or were looking for some icelandic books to read. We weren't looking for a computer to use for a minute since there was not such thing as email or the internet at that time.
I only remember two things about that visit to the Akureyri library that day. One was that I heard a mother say to her four-year-old child, "Út með þig!" which means, "Out with you!" She was holding a bunch of books and trying to herd her child out the door. The reason I remember it to this day is because the preposition "með" or "with" is almost always followed by a pronoun in the dative case, not the accusative like she had done (fascinating, I know). The other reason I remember that day in the library was because I found a copy of Oliver Twist in Icelandic. 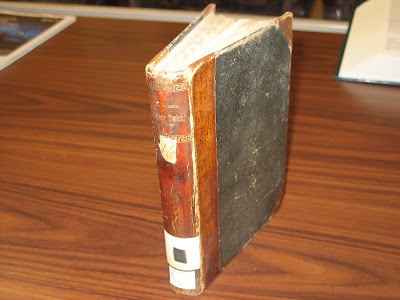 I remember wishing I had a copy of that book, but couldn't find one. It must have been out of print--or perhaps I was too preoccupied with my mission to really search for the book.
Many years ago, the Icelandic Reading Society and the city of Spanish Fork, Utah donated a large collection of books written in Icelandic to the BYU Harold B. Lee library. 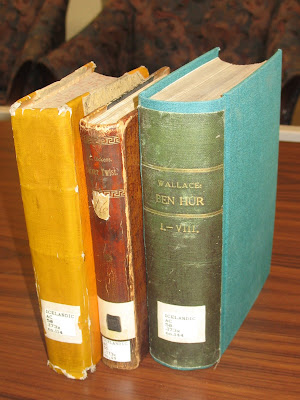 Most of them were a part of a collection that had been put together from the family libraries of Icelanders who had immigrated to Spanish Fork from Iceland between 1853 and 1914. As the original Icelandic immigrants would pass away and the surviving children didn't speak Icelandic, the books went unread and were eventually donated to this collection. In the end, Spanish Fork thought it best to donate the collection to BYU to be preserved and used by a wider audience of possible readers.
I look through the collection on occasion. I currently have three books from this collection checked out. One is a very worn copy of Oliver Twist, published in 1906, 103 years ago. It was translated from the English by Páll E. Ólason. I thought I'd never get to read it in Icelandic! The second book is Ben Hur. It was published in Winnipeg, Canada where a good many Icelanders immigrated during the heaviest immigration years in the late 1800's. It was published in 1909, 100 years ago and was translated by Jón Bjarnason. 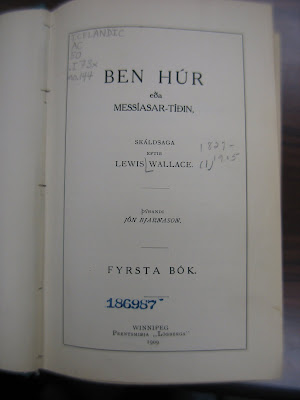 What a herculean task! The third book must have been much easier to translate into Icelandic. It was a collection of three Tarzan books by Edgar Rice Burroughs and published in 1923. Extremely fun reading. The stories are engaging enough that I am eager to keep working through the parts that I don't fully understand. 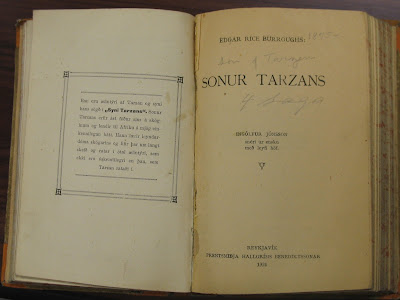 A curious fact: In 1930 one book per 12,497 persons was published in the U.S. In Iceland in the same year there was one book per 466 persons. I don't know what the current ratio is, but I heard often on my mission that this still held true.
So many books. So little time. So many Icelandic words I don't know!
Posted by Darron at 10:16 PM 2 comments:

Á vegamótum (At the crossroads)

I am really quite lucky. I have somehow ended up frequently being at the crossroads of things that happen in the Church in Iceland. I don't know how it has happened over the years.

The newly called young man who will be going to Iceland on his mission in May of this year came by my office again. Remember he is from California. He is coming to the Icelandic class we have on campus two of three days a week that we hold the class. He comes with a friend who is an RM already who served in a Spanish-speaking country. They are trying to catch as much as they can in the class. It's tough since it's a 202 class and the other students are quite a ways along. But it is fun to have them there. 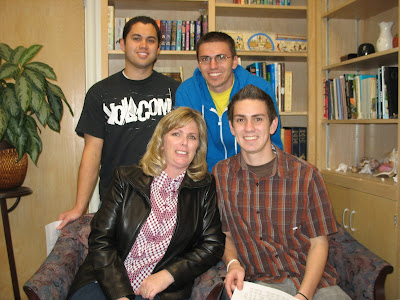 Well, when Eric dropped by my office last week, he came with a brother, Dale, his mother, Karen, and the friend he comes to the Icelandic class with, Brandon Cruz. We chatted about Iceland and the great future that is in store for him there.

I then went out to another blog that I am following of a family of Icelanders whose son, Matti, is on a mission just an hour north of me here in Utah. I saw a picture of a former missionary to Iceland who was having dinner with Matti and his companions. 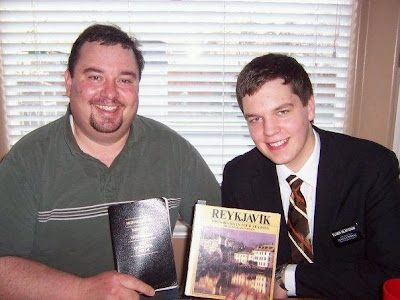 The former missionary in this picture is named Greg Larsen who is a dentist in the Salt Lake valley and served in Iceland a few years before me. It was fun to see them together in a picture. Matti's parents, Ólafur and Björg, are in the Reykjavík branch.

Right after seeing Matti's and Greg's picture, I opened up my emails and saw an email from a former missionary named Travis Hoban who I might have mentioned before. Travis is back in town in Provo and we have arranged to have him teach a 211R Icelandic class in the spring at BYU. a 221R class is a conversation class where the students in the class get together and just speak Icelandic on assigned--and sometimes unassigned--topics. Travis has been home for about 9 or 10 years. I am only allowed to teach one class fall and one winter because of my full time responsibilities in the International Admissions Office. So this is perfect for RM's and others who just want a chance to improve their Icelandic speaking abilities in a little more structured setting than they might be getting otherwise. It can be taken for credit or by audit, so perfect for anyone. 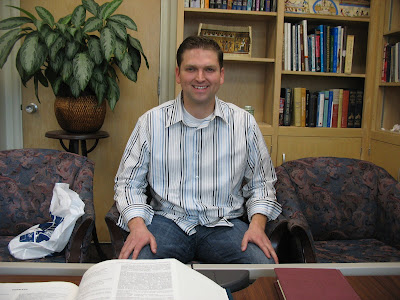 So get signed up if you are in the area and want to improve your Iceland skills. This last picture is of Travis.

So many great people have taken and are taking part in the work in Iceland. :)
Posted by Darron at 6:32 PM 2 comments:

Today is Monday. So at five minutes before 4pm I get all my Icelandic books together that I use to teach my Icelandic class at BYU and head over to the classroom. The class is held in the JKB, or the Jesse Knight Building, which used to be the Humanities building until the new Joseph F. Smith building took all the Humanities folks in. When I get to the classroom each day, there is at least one student already there and then the other two wander in. This is the ICLND 202 class and we are having lots of fun this semester putting everything they have learned up to this point into practice. Today we talked a lot about eating at restaurants and what words you would need to know to seem like an Icelandic pro, like "þjónn, ungfrú, flesk, sykur, reikningur, hrísgrjón, smjör" etc. It is a fun class and each of the three is learning a lot and getting better and better.

Once class was over today, I wiped down the white board as usual and then began to leave with the students. Right outside my door though a young man stopped me and said, "Professor Allred?" 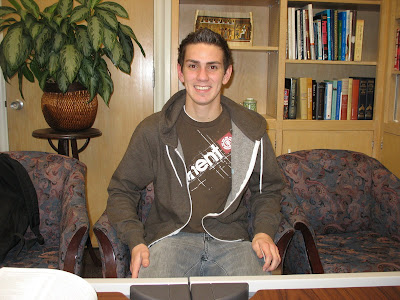 I said that I was he. He then introduced himself as Eric Ellsworth who had just received his mission call to serve in Iceland. I was really shocked! He is a current BYU student from California and had looked up the class online and found out where we were and dropped by to meet me. The three students were jealous that he'll be getting to go to Iceland in July after being in the MTC for two months. He will be replacing Elder Soelberg who goes home by himself so Elder Ellsworth will go to replace him by himself. Kind of a bum deal in the MTC not having a companion to speak your language to though.

I had Eric come over to my office in the next building and printed a picture of all the elders who are there now and labeled them for him. He recognized President Olauson in the picture which I was impressed with. He is very excited to go to Iceland. He is just beginning to learn about one of the most interesting places on earth. He wants to begin studying the language now, so I suggested he come to the Icelandic class if he could. He will be free to come on Mondays and Fridays, so he'll come then.

I snapped a picture of him before he left. Welcome to the family Eiríkur! There's no going back now!
Posted by Darron at 11:29 PM 11 comments:

My blog entries from yesterday were made late in the afternoon while I was at my office trying to catch up on some things on a Saturday afternoon. I almost couldn't get to my office with all the cars in the area trying to park and hurry into the Marriott Center to watch the BYU vs. Utah basketball game. I was there for a few hours and then rushed out of my office heading to where my car was parked. I had to walk through the Tanner building where all the business classes are taught. I followed a young man and a woman out of the building and noticed as I was passing them that the man looked familiar. I took a second look, and sure enough, it was Kris Richardson who had served his mission in Iceland back in 2004. I said, "Kris, is that you?" and sure enough it was. The girl left and we stopped and talked for about 15 minutes. He finished his degree at BYU recently and is preparing for law school in Arizona before too long. Kris and I had met back in 2004 when I was on my first trip to Iceland since my mission and he was there in the middle of his. He came to our mission reunion in 2007 (the first picture here) 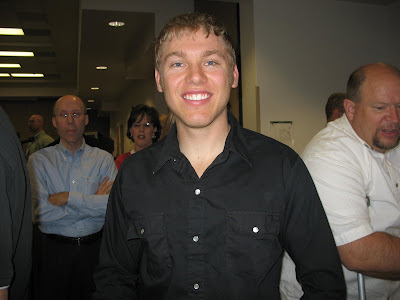 and two years later I run into him in the parking lot on a Saturday at BYU. 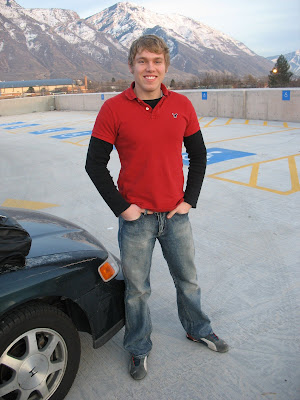 Strange coincidence. Some RMs don't like to speak Icelandic with other RMs, but he seemed to enjoy it. I like that.
Posted by Darron at 12:28 AM No comments: