Til að geta beygt eitt einasta íslenskt orð sem til er! (To be able to decline and conjugate every single Icelandic word that exists!)

Since I am not a native speaker of the Icelandic language I am often looking for sources online that can help me decline a noun or conjugate a verb that I am unfamiliar with when I can't figure out how to do so in my dictionaries. In the Icelandic class I am teaching at BYU right now, I have three students. I was grading one of their writing assignments not too long ago and came upon a website while doing so that was the answer to this problem. The website was designed specifically for Icelanders and has no English. But it is also a really powerful tool for those of us who are non-natives who also want to learn the language correctly. 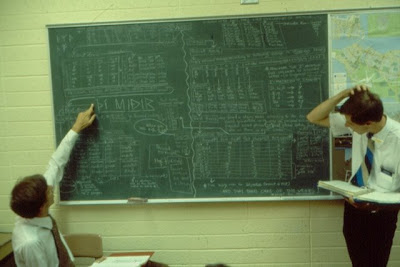 All you do is type in the word and it will show you EVERY SINGLE way the word could be declined or conjugated in EVERY SINGLE language situation. I couldn't believe I had finally found a site that I could go to for EVERY SINGLE Icelandic inflection question and the answers would be there.

Well, the site is: http://bin.arnastofnun.is/. No more dead ends or frustration about not knowing for sure how to correctly change a word when I wanted to use it. The site does NOT help with phrases or colloquialisms, but that is small potatoes when you consider what it DOES help with. Thank you to the Árni Magnússon Institute for Icelandic Studies which has developed the online reference for the rest of us. (A missionary from the late 70's or early 80's sent me this picture of early Icelandic training in the MTC. lol)
Posted by Darron at 3:06 PM 2 comments:

Yeah, long time. I know. I've been a busy beaver keeping the wolf away from the door, as my grandpa Best used to always say. But I've had a few visitors come to my office in the last few weeks. The first happened to be right before Christmas on the 23rd of December. Lee and Marti Wohlgemuth had just come home from serving a Senior mission in Iceland a few weeks before to their home in the Ogden area. They had told me that they wanted to come down to Provo sometime and to see me and a few other friends. The first time they tried to come it was snowing too much so they made it down on the 23rd instead. It was snowing that day too, but they came anyway and made it withough too much trouble. This is the photo of them and me that day. 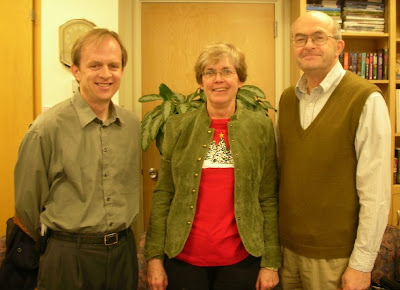 They had to come home from Iceland a few weeks early because of some heart trouble that Elder Wohlgemuth was having, but he seems to be doing better now. Good hard-working folks who I look up to.

Two months later I was in my office again and a colleague called me on the phone and said he had a friend of mine in his office. I turned out that it was Curt Hutchings who was one of my teachers in the MTC back in 1984. He had come up from his home in southern Utah in Ivins with his recently returned missionary son to get him back into BYU after having deferred for his mission. My colleague friend brought the two of them to may office and we had a great time catching up. 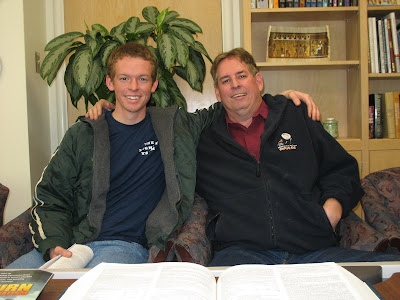 It is amazing to me how little a deep friendship changes in twenty-five years when the friendship was created during an LDS mission. We've both cashed in a bit of youth to raise great kids, but other than that....
Posted by Darron at 2:38 PM No comments: