Dinner with a stranger. I've been to Iceland twice. My first trip lasted for almost two years and started in 1984. My photos back then were all in color (I'm not THAT old) but end up looking grainy when compared with even the cheapest digital camera photos of today. My second and most recent trip lasted for 8 days and was in 2004, twenty years later. I STILL didn't have a digital camera and my photos still looked grainy (I was using the same old camera unfortunately). My next trip will be captured with a good digital camera and will 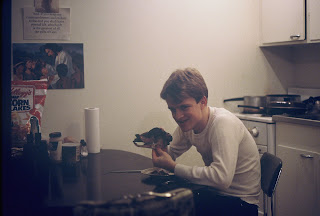 A lot can change in a country in twenty years though. When I was first there from 1984 to 1986, I seem to remember that there were not a lot of food choices, when compared to the choices today that is. The main grocery store in those days was called Hagkaup, as I recall. In 2004, by comparison, there seemed to be no end to both the products from Iceland and the products from every other part of the world that were readily available. In 1984 it wasn't very hard to find the svið section of the frozen foods (sheep's head for the uninitiated). Today it is a lot tougher. There seems to be less of the traditional food available compared to my first trip. This first photo of me was during my first svið meal. The old fisherman we lived with brought a full head home for dinner one night. Sometimes he cooked things for us as missionaries. 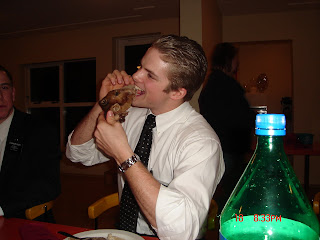 Sometimes we liked them. He thought that svið needed to be eaten within the first month of your arrival in Iceland and living with him. His name was Þorsteinn. He'd buy a head for him and a head for the two missionaries. In the store you would find the svið with all the hair singed off and it would be split down the middle of the skull (stay with me). Then it was put back together and vacuum packed and frozen for the grocery store. The second photo is of a more recent missionary doing justice to his svið. I thought that svið was hard enough to get used to. Then I learned what slátur and hákarl were.

Our fisherman buddy would bring home slátur on occasion too, but said it was not meant for us, since Americans had such delicate stomachs. I didn't realize that this was his attempt at a tricky play-on-words in English. That's because slátur is sheep's stomach, and is known more commonly as blood sausage. I had svið twice. I had slátur only once and it was one bite only. Some foods ended up growing on you over time. Slátur wasn't one of those foods though for me.

The worst of all though was the traditional hákarl. Another missionary and I went to visit an Icelandic family who had recently joined our church. Much of what we did as missionaries was to fellowship and strengthen those who had joined our church. Well, when we knocked on this family's door (was it in Breiðholt then?) the father, Emil, invited us in and asked us to join them for lunch. I hadn't been there too long and wanted to show them that I was willing to try the things that were important in their culture, so we sat down to a rather "traditional" lunch (there's that word again). Central to the lunch was a bowl of what appeared to be cubed, raw meat of some kind. My Icelandic was not at that time the powerful, verbal library that it was to become, so when Emil explained what was in the bowl, I missed most of it. I had not heard the word "hákarl" up to that point, so it could have been herring for all I knew. But, to be precise, it was nearly rotten shark meat. Before anyone had noticed, I had filled my little plate with a bit of smoked meat, crackers, cheeses, etc. The cubed meat had me a bit worried though. One of the kids was just popping the cubes into his mouth and downing them without a thought. It looked suspect to me though. He was six though and I was nineteen. If he could pop them, so could I. When the first cube was half-way to my mouth I caught my first smell of the foul meat (not fowl meat). The smell was so strong and so horrifyingly disgusting that I almost threw up before the meat got to my mouth. Once there, I did not chew but swallowed immediately to shorten the time the meat had to come anywhere near my tongue. I did not succeed in avoiding a strong revulsion for the nearly rotten shark meat for the rest of my time in Iceland. Describing the process of preparing the shark meat for the average Icelander's table is almost as disgusting, so I won't put you through it.

I loved their snúða, their rúsinu brauð and their vínarbrauð, two of the three being pasteries, so who wouldn't. I loved their pylsur (hot dogs) too and had a few when I went back the second time. Of all the breads though, I loved the rúgbrauð (a type of heavy rye bread) which was sold in "bricks". I can't find it in Utah though. Put a slice of this dark, heavy rye bread in the toaster and then add a little butter...mmm, mmm....I can't understand why we don't have this kind of bread in the West. I don't know if there is anything similar back east (we know very little about the eating habits of those mysterious easterners).

The last two foods that were very common and very yummy for young men who didn't know how to cook very well were fiskabollur and hrossabjúgu. The fiskabollur were ground up fish meat with other yummy spices to make a little ball of meat that was fried or cooked in some other way. One of my favorites. The hrossabjúgu were smoked horse sausages. Sounds terrible to eat one of man's best friends, but the Icelanders had to eat what they could in the old days. Their horses were what kept them from starving to death often in the old days, along with their sheep and fish. The tradition holds on till today, but fewer of the younger kids are "indulging" these days. The family we stayed with when visiting in 2004 were suprised when I told them I had missed the hrossabjúgu, but were happy to prepare some for me the first night. Ahh, heaven. We couldn't even find the balls of fish in the store when we were on that 2004 visit.

We as missionaries were always eating on the cheap. None of us were very good cooks, except for my first companion who ended up being a professional chef and now lives in Oklahoma. I was spoiled by him since he was my first companion. Those who visit today will find such fine things as steinbítur (sea bass) on the menus of classy restaurants, but we had the cheaper lúða (halibut) or þórskur (cod) brought to us on occasion by Þorsteinn free of charge. Over the years the missionaries learned a lot about the Icelanders from the foods they would eat. I suspect that learning such things in Iceland today by newcomers is not quite so easy.
Posted by Darron at 10:05 PM

The first hrossabjúgu I remember buying there were tað reykt. I didn't know what tað meant at the time, but I don't think I bought that kind again when I did.

Send me an email you dog!
chefdt@sbcglobal.net

How long after we left do you suppose the missionaries stopped taking the obligatory "Svið Picture"?? When Steve and I went in '06 the missionaries were eating frozen pizzas and PBJs. Most or all had never even tried most of the foods you and I ate as staples....give me some fiskibóllur!

We ate fiskabollur twice a week while I was in Iceland. Times have surely changed now that so many other types of food are available from so many other places in the world.