Whiplash. For every missionary who serves in a country which is not their own, there comes a time when you feel like you've lived in that country for a very long time. I got sent up to a little town called Akureyri in the north of Iceland when I had been on my mission for over a year and a half. I only had five or so months left when I got there before I would be required to go back to the deserts of southern Utah. I had begun to feel that my life before my time in Iceland had been a very long time before. The Icelandic language was comfortable to me. The way the Icelanders lived and the things they believed had become relatively clear to me. I knew what soccer teams were their favorites and how they felt they fit into the international big picture. I had spent a good portion of every day speaking a language that, just 18 months before, I had not even heard of.

When I arrived in Akureyri, everything was very similar to what I had experienced in Reykjavík. The mountains across the fjord looked similar to the mountains back in Reykjavík. There was snow all around. The people spoke Icelandic in the same way with no change in accent. It was a small town comparatively, so things felt a bit more laid back. But all in all moving from Reykjavík to Akureyri wasn't as big a change as I had been thinking it might be.

I began working with Elder Miller 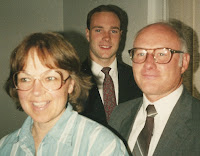 , the missionary in the back of this picture on the left. He was a hard worker and wanted to be a good missionary. We worked hard together in the beginning of a mild winter there at the end of 1985. Not too long later, Elder Miller went back to Reykjavík and I stayed in Akureyri and was put with Elder Holt. We got along fine and tried to work hard in a town with no members, no real investigating non-members and no place to meet on Sundays except our apartment. Before long Elder Holt and I had a routine down and were systematically going through the city to find any who might be interested in our message of restoration. 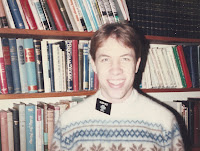 One day Elder Holt and I were in a grocery store downtown just picking up some things we needed before going back to our apartment late one afternoon. I had already gone through the line and was waiting for Elder Holt. All at once I noticed a dark-haired, dark-skinned woman looking back and forth at me and then at my companion. She quickly decided to approach me and asked in English if we were Mormon missionaries. I was very surprised since we were in an out-of-the-way town with no members. The woman told me that she was a member of our Church, originally from Argentina, but now living with her husband in Canada. The two of them were just visiting their family in the area. That suprised me too, because in those days in the mid 80's there were very few foreigners living in Iceland, let alone in Akureyri in the middle of nowhere. The woman went on to tell me that her husband's family lived across the fjord and ran a chicken farm! I was blown away. I was so deeply immersed in the Icelandic culture, language, land and people that I was feeling a bit of whiplash mentally and culturally.

Before we left the store, the woman had invited us to dinner at the brother's home across the fjord in a few days. We of course accepted. They came around the fjord and picked us up by car. When we got there we were introduced to the whole family. None spoke English or Icelandic except the brother who owned the farm. He spoke a bit of broken Icelandic. Their aged mother lived with them and had talked to missionaries like us years before and had even accepted a Book of Mormon once and read it. Trying to communicated during dinner and afterwards was very difficult. I had always up to that point been able to switch from English into Icelandic for the last 18 months when I had trouble communicating with someone. But now neither English or Icelandic helped. And myyears of Spanish during junior high and high school weren't coming back to me. Cultural whiplash big time.

The dinner was superb

but completely different than anything I had eaten my whole mission. After dinner they had us go with them into their living room where they proceeded to get out the guitars. I didn't have any idea up to that point how extreme the cultural whiplash was going to get. These folks knew their guitars! They began to play and quickly I realized that these were no amateurs. After playing a bit (with our mouths wide open) they shared their secret that, on weekends they performed in restaurants and hotels all over Iceland. They raised chickens AND were professional musicians. Their music gave me chills. All the events of that entire evening were so other-worldly compared to the last 18 months that Elder Holt and I were quite overwhelmed with the differences. We had never heard Icelanders be very musical on the whole, but these Argentines were pros. It took us days to stop thinking so much about it afterwards. We reimmersed ourselves fully back into the Icelandic culture all around us. We stopped trying to remember our high school Spanish and went back to trying to memorize ten new Icelandic words every day before we went out to find people to teach. A wonderfully unsettling time at the end of 1985. No matter how many languages or cultures a person becomes to know well, there will always be thousands that are nearly completely unknown to us. God did not intend that our sphere of influence cover all people in all cultures. But we do have a sphere of influence, some of us in more than one culture. What are we doing with our influence?
Posted by Darron at 11:28 PM