Different Views. I don't live by the sea right now. But I have a few times in my life. When I was fresh off of my mission my whole family (with all eight kids) moved to Hawaii so my dad could teach at BYU-Hawaii. I found out about the move shortly before I returned home from Iceland. We lived on the edge of two towns in Hawaii: Laie and Hauula. Laie is the town where BYU-Hawaii was located. Hauula was right next door. Both are very small places on the edge of the water before the mountains begin. The water was only 100 yards from our home on the famous Kam highway. We spent a lot of time in the water there with all kinds of eels, fishes, corals, sharks (further out), and shell creatures. Even sea turtles could be seen off the shore nearby just swimming along.

About half way through my mission I got transferred to a little town called Keflavík.

It was about a half hour from Reykjavík. It was where the NATO base was located until about a year ago when they shut it down and moved nearly all the military people out. Now they have a bunch of old military buildings that I don't know what their plans are for them. This picture was taken in 1985 out our apartment window to the right facing Reykjavík. You can't quite see it, but its out that direction. Poseidon was the name of a clothing store across the street. Moms, many with strollers, would go in and out all day. 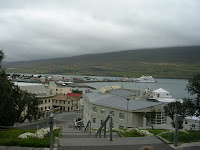 know that with the changes in the weather came lots of changes in the "faces" of the ocean that was right in front of you all the time. In Reykjavík I always lived where I could see the ocean from my apartment. In Keflavík and Akureyri it was the same. In Akureyri we lived on the edge of a fjord. You can see the water and then the other side of the fjord in this second picture. I learned to really love seeing the water wherever I lived.

In Keflavík my companion and I lived right on the water in our apartment. The beach consisted of a barrier of large rocks, similar to what I remember the water's edge being like in San Diego when I visited there two years ago. At high tide there were about six additional feet of rocks before the water would hit the businesses right across the street from us. The first late-night storm or two really caused some anxiety for my companion and me. We thought for sure that the waves would just come up and take us away.

I found myself looking out at

re in our apartment. It was better than look-ing at the mold in the room that we didn't use. I began to know the different "faces" or "moods" of the water and took pictures of some of them. I recently had these three converted from slides to digital images. Quite a bit of difference between them.

I remember sitting in that apartment one day and thinking about these different faces. I started to think about how different the views of the every-day Icelander were from ours as well. They really did come from a completely different background and history. Their socially-but not spiritually-based Christianity was quite a different viewpoint when compared with the restored Christianity we were teaching. Most couldn't even comprehend how anything we said could possibly fit into their world.

I was always glad when the sun came out after one of those major night storms. The light always made all the difference....