Hinn kennarinn (The Other Teacher)

A few days back I was mentioning things about my MTC teachers. I had pictures of Eric Kristjansson and Paul Lewis at that time, but none of my evening teacher, Curt Hutchings. I got some today though. Curt lives down in southern Utah now with his wife and kids. He's the one on the right in this picture with Bret Leifson. This article makes a point of mentioning that the two of them just happen to be "Western Icelanders". This means, of course, that their ancestors left Iceland some time after 1851 and before 1914 and immigrated to Utah. Bret's parents still live in Spanish Fork, Utah I believe. Spanish Fork was the place where most of the Mormon Icelandic immigrants moved when they left Iceland and crossed the plains.

One or two of the missionaries from my day had Icelandic blood.

Elder Peter Nordal was one of them. Haven't been able to track him down yet. He is originally from Canada, but none of those who served with him know where he is today. I've looked all over in the cities in Canada where his companions said he was from, but no luck. If you know where he is, let me know.

I remember specifically thinking how genuine Curt was as our teacher. He taught us in the evening like I said. Things were a little less formal during the evening class, though we still worked hard. He and I have gotten back in contact in the last few years. He was instrumental in getting me in contact with a good number of the other missionaries who served during his day as well.

od, or that I had relatives from some specific farm in Iceland. One of my sisters is good at researching family histories, so she told me she would work on trying to find an "Icelandic connection". When we were tracting or talking to people downtown, it always seemed to be easier to talk to people if you had ancestors who were Icelanders. In this gray apartment picture, my trainer for all of three weeks, Dale Tanner, looks like he is knocking on some stranger's door, but it was really our apartment during my first three weeks. It had two floors above ground with a basement. The missionaries lived in the 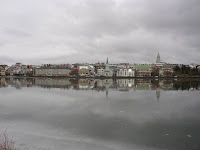 basement most of the time, but there is also a door in the shadow to my right that goes to the upper floor. We were there for a time.

The owner of the apartment was a friend to the Church named Halldor Hansen. He let us live there, against the wishes of his family. The bizarre thing about the upper apartment was that it had wall-to-wall shelves with old classical and opera record albums in every nook. Halldor's main floor had newer records sitting all over the floors with just enough room between them for a path to his sound system. Most of the upper-room records were the old brittle, thick records from the 50's and earlier. This was all before plastic records and CD's . Half of you will have played vinyl records in your youth. You could walk two blocks west of this apartment and be at this pond and the downtown area. That was a nice place to live if you were working the 101 area in Reykjavík. This apartment was just behind the trees you can see to the far right in this picture.

There were a lot of people who made a difference for the better in my mission. These were three of them: Halldor, Elder Tanner and Elder Hutchings.
Posted by Darron at 4:24 PM