A small world. I remember being in Iceland only a short time when one of my early companions took me to visit a new member family. It was the family of Emil Emilsson and his wife Ingibjörg (Someone's daughter--I can't remember). 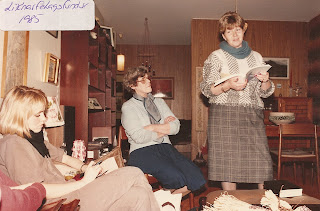 They were living in an apartment in town at the time and it was fun getting to know them. For the life of me though, I can't find a picture of the two of them together. I only found this one so far that I have converted from a slide with Ingibjörg on the far left in the picture. All the missionaries thought she was beautiful and had a crush on her.

After a time, Emil and Ingibjörg moved with their son and daughter to a little farm house outside of Breiðholt that was quite literally out in the middle of nowhere. There weren't any other homes in sight of their tiny home. You got off the bus at the far edge of Breiðholt and then walked a mile or so to their home on a dirt/gravel road. You couldn't see the little home because it was around some little hills and aways off from the busstop. We would go and visit them on occasion and play with their two kids. They were both such cute kids. I can't for the life of me remember the name of their son, but I do remember the name of their daughter. It was Lára Ósk. We might say in English, "Laura Wish". Lára was very cute, neither of the kids being very old.

Well, years passed, I went home to Utah after my mission and after a few years I heard that Emil and his family were moving to Utah. I was excited to see them a time or two after they arrived, the last time being about six or seven years ago out in Spanish Fork, Utah which was settled by Icelandic immigrants. The Icelandic Ambassador to the United States, Baldvin Hannibalsson, was visiting Spanish Fork paying his respects to the descendants of those Icelanders who came there so long ago. About 25 people were invited, a number of whom were returned missionaries who had served there. Emil and Ingibjörg were there. Emil and Ingibjörg had started a business of some kind involved with off-road vehicles, I think.

Since that time, I really haven't heard much of anything about them. Then one night my oldest daughter came home from her work at the Utah State Developmental Center in American Fork, Utah. She told me that one of the girls 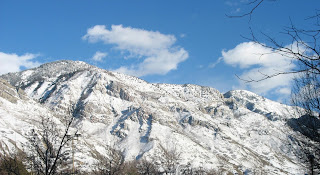 she worked with said that she was from Iceland originally. My daughter perked up and asked her lots of questions, like when she came over, if she knew Darron Allred, etc. She said her parents would, since they were the ones that came over 15 years ago or so. She came home and told me about it. I told her to find out the girl's name and her parents' names and I was sure to know them. She finally saw the girl again and found out it was the same Lára Ósk that I had known when she was a little girl in far away Iceland. Smár heimur. I can't wait to see them again and to reconnect after all these years. This picture is of the mountains near their Utah home now. A lot different looking now than when I first met them all those years ago.
Posted by Darron at 11:51 PM

Hi, this is Hera. Thank you for this wonderful blogging you are doing. It has brought back many great memories. I was wondering myself what had happened to many of the trubodar that served in Iceland. Thanks to you we are able to get in touch with so many. Keep up the good work.
Hera
Australia

Darron,
Ingibjörg Einarsd.
Yes, she was very pretty....still is. Just not active in the church. Einar Már was the boy. Lára married recently to a very nice young man from Utah. They have another girl named Sóley, I believe. We went to see Emil after the Reunion last year. It was good to see him. I feel bad for not having stayed in better contact...Don´t forget, we came home to a world devoid of email and Facebook...;-)