The earthquake in China was an 8.0 on the Richter scale. The epicenter was in Sichuan Province. 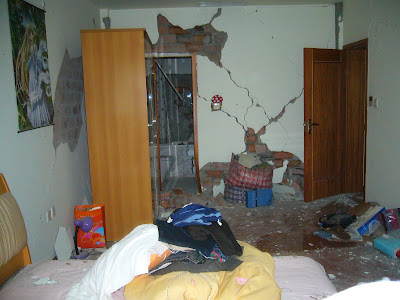 About 90 kilometers away is a city called Du Jiang Yan. I girl at BYU sent me a few pictures of the damage to her family's home today in Du Jiang Yan. It had been condemned and will need to be rebuilt. 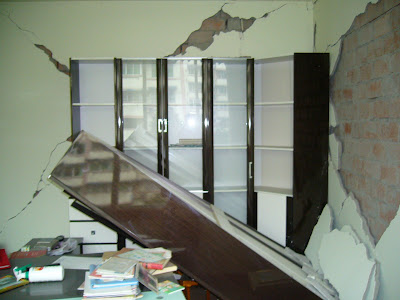 Many families there are living in tents at the edge of the city. The following is a portion of an email I received from this girl in my office at BYU, "My hometown Du Jiang Yan is only 92 kilometers away from the center of the earthquake; therefore, my hometown is one of the cities that has been damaged most severely. Over 4000 people died in my hometown alone and 80% of the households are so seriously ruined that they need to be demolished."

In contrast, the earthquake in Iceland was not as strong--in the 6.0 category--and did not kill anyone thankfully. 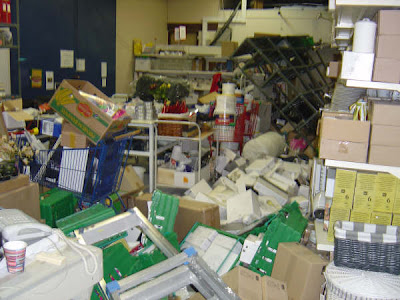 But there was still a lot of damage. I just received a few pictures of the Nóatun grocery store showing some of the damage there. Lots of things thrown off of shelves and broken glass.

I wrote to the current senior couple who are serving in Iceland right now and they wrote me back the following about the members who were in that area: "Most of the damage was in Hveragerði and some in Selfoss. In Selfoss, Barður had some glass things break, they were able to clean up the damage. No one was injured. Johan and Þorstina seemed to have a good deal of damage in their home. Things fell off the walls, much internal damage. In fact Johan said that his walls weren´t at right angles anymore. They are not cleaning up because insurance needs to come and take pictures. They also had a trip to Paris planned and will leave on Tuesday for a week. When they return, many have offered to come and help them clean up. 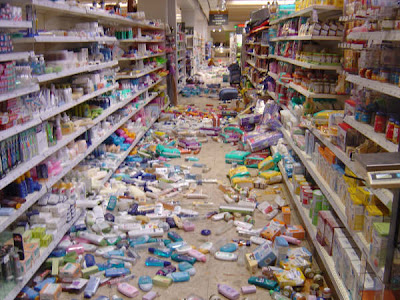 Sveinbgörg had many things fall out of her cupboards. She said she has 4 plates left out of a servive for 12 china and everyday ware. Her children have been very good to come and help her clean up things in her home. She said after the earthquake they were told to stay out of their homes. She said she had walked up and down the street for as long as she could and then she went into her garden to work. She said she was kneeling to work in her flowers and for about 20 minutes while working, the earth just kept moving around. She mentioned that she has felt many after shocks, as have many of the people in Selfoss and Hveragerði. Valla said they just had a few trinckets that were broken. Margret Annie did not report any damage either, but she was further away from the center of the earthquake. Greta was in Spain at the time with the kids. There was minor damage to the road from Hveragerði to Selfoss, a couple of new bumps and one small crack across the road. We have felt no aftershocks in the Reykjavik area. We were very blessed that there were very few injuries, and nothing serious. Since it was a good day in Iceland, some school children were outdoors playing and a ceiling came down in their school. Also some men digging ditches took a late break and so they were away from their machinery when the quake occured. All is well with us here. We are happy to report that everyone is safe and many of the messes have been cleaned up and now they are back to their regular lives. We will send more reports if anything major occurs."

Thanks Darron for the blog. I can hear through the information how Johann does not let this affect his way of staying positive. Sveinbjorg can always put a smile on your face. Soldier on.

We should be careful what we wish for. :)