A few weeks ago I was contacted by two people who serve in the leadership of the Icelandic Association of Utah, David Ashby and Jack Tobiasson. They asked if I would do as I have done in years past and arrange some kind of musical number for the Sunday night fireside which is associated every year with "Iceland Days" in Spanish Fork. I agreed and then proceeded to send out a mass email to all the former LDS missionaries who had served in Iceland. The email went out to over 100 email addresses. I asked all who might be in the area and available to come to Spanish Fork and sing "God Be With You" in Icelandic for the fireside last night. There ended up being eight of us there: Tyler Shepherd, Craig Holdaway, Matt Lillywhite, Brian Moser, Cody Sunderland, Matt Hyatt, Dennis Flynn and myself. Right before we sang I told the audience that we had not rehearsed, but that we would sing the same "parts" as we did when we were missionaries. The pianist played the introduction and I heard a power come out of these men as they sang that favorite hymn, "Guð sé með sér uns við hittumst heil". 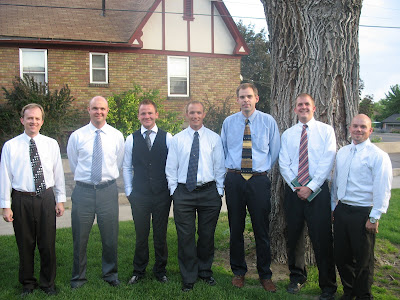 I was able to get everyone rounded up afterwords for a picture except for Matt Hyatt. He got away somehow before I could catch him. From left to right in this picture we are: Darron Allred, Dennis Flynn, Cody Sunderland, Tyler Shepherd, Brian Moser, Craig Holdaway and Matt Lillywhite.

A woman named Telma Marínósdóttir gave the opening prayer in Icelandic. Then I noticed her crying as we sang. When I heard her fluent Icelandic during her prayer and noticed her crying, I wondered who she was. I had never heard of her, and yet here she was, involved, praying powerfully in the spirit. She was not a Western Icelander so who was she? I spoke to her afterward and got her interesting story. She basically moved with her family to Las Vegas when she was younger for her father's work, found the Church there and joined, has since married and just found out about the Icelandic Association of Utah not too long ago. We became friends immediately and she promised to help me in any way she can with my teaching Icelandic 201 in the fall at BYU.

The Western Icelanders in the Icelandic Association of Utah continue to hold on to their heritage. I heard someone say that the first Icelandic Days celebration was held in the 1880's. A proud heritage that I am honored to be a part of, even though the closest blood tie I have found so far is only in Denmark....
Posted by Darron at 11:16 PM