Not knowing more about the causes of earthquakes than that the tectonic plates are involved as they move, I used to think it was strange when I would hear about an earthquake occuring in Iceland like it did last week. I thought it was strange because the plates are pulling apart in Iceland, not coming together and colliding. That is why when you go to the visitor's center at Thingvellir in Iceland, there is a display there which shows how much the land has separated in the last 1000 years. I saw that back in 2004 and was reminded again how unique Iceland was as a landmass.

I searched the internet today looking for a unique picture which showed what the earthquake had been like in Iceland last week.

I found this seismograph image which is said to be showing the "P wave and the surface waves." I don't remember enough from my college geology class to remember exactly what those were, but it is easy to see that some serious movement was going on. All news reports say that the damage will be expensive to repair, but no one was seriously injured.

As missionaries in Iceland, every one of us used to wish for some kind of cataclysmic event there to help people realize they needed God. I suppose we didn't really want people to suffer much of what that type of event would bring, but something Elijah-esque would be okay. A famine, bank and money problems, an earthquake or two, with a volcano eruption in a populated area thrown in for good measure. Oh, wait. All of these things have happened in Iceland, if not during this last 12 months alone, then we can go back to the volcano that covered a good part of Heimaey of the Westmann Islands back in the 70's. And okay, the famines were not that recent, but some serious suffering was going on in those days.

But even when those things do happen, the missionaries continue to move along, working as hard as they know how, and continue to find just the one here and two there who can sense the gift they are being offered. The key then, I suppose, is to try to avoid having to receive a "shaking" from God in the spiritual sense by trying to sense the gifts that are right in front of us.

He exists. He loves us. 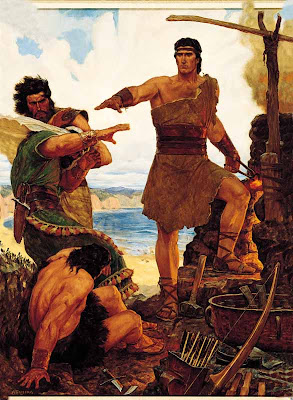 He has ALWAYS given his truth through his Son, in person, to prophets who then go forward with authority to preach the purest Word. We can know him today and hope to avoid a spiritual shaking. As Nephi was commanded in the Book of Mormon in 1 Nephi 17:53 "And it came to pass that the Lord said unto me: Stretch forth thine hand again unto thy brethren, and they shall not wither before thee, but I will shock them, saith the Lord, and this will I do, that they may know that I am the Lord their God."
Posted by Darron at 9:16 PM