Mikið frá mynd (A lot from a picture)

You can tell a lot from a picture. Take this one for example. It is of some unknown Icelanders. I got it during a random search of websites having to do with Iceland. 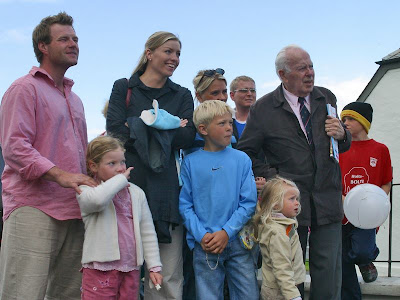 What can you tell from the picture? It is easy to see that more than one family is represented here. At first glance it appears that there are two daughters and a son in the foreground. Upon closer inspection though you can see that the little girl on the right has the hand of, not the grandfather in the picture, but the woman behind her. The little one wanted to see something through the crowd but couldn't do so without squeezing through. Mom is holding on tight though. Whatever is being looked at is fascinating to the kids and adults alike. The boy in the red shirt appears to be a part of a youth soccer team and if you translate the words on his shirt, they read, "corner ball". There are some kind of festivities in the area. The red-shirt boy has a ballon with a netting around it. The girl on the left has a ballon but it is not blown up, though it appears she has and is trying. The boy in the blue shirt, by the way he is standing, seems to have been right there for at least a few minutes. There is likely some kind of performance underway that is captivating them all. I would dare to say that this boy is "popular" at school.

The date of the picture is August 21, 2004. On that day in Reykjavík it was the Reykjavík Marathon. There may have been festivities downtown on a warm Icelandic day in August that would have brought everyone out. The mom on the left is being entertained. She and at least one of her children came to the events with a jacket, just in case, but has taken hers off, as well as has perhaps the boy. The girl on the left doesn't mind dressing like one since she is wearing pink, has a butterfly on her pants and lace at the bottom of her shirt. Grandpa has a newspaper or a program of the days events and seems to be intent on the out of sight performance as well.

What else can you see about the picture of these unknown Icelanders?
Posted by Darron at 1:15 PM

This is such a pretty blog. For some reason I was looking at the world map on Google, zoomed in on Iceland (after having found nothing interesting on Greenland,) and wondered what it was like there. I thought- I bet there's a missionary out there who has posted some stuff, and voila! Thanks for the effort you have made- just wanted to let you know it was noticed by a curious someone in Ohio. ;-)

Glad you like the blog. I was number 55 of 165 missionaries who have served in Iceland since 1975. I notice that one of your favorite books is the Book of Mormon. Nice to have "family" in Ohio.