I'm sure my old missionary friend who I taught in the MTC was just being polite by sending around the email, but now I think I'm hooked. I haven't seen a full hour-long game of European style handball since I was a missionary 23 years ago. And even back then, we never saw a full game of handball since we didn't watch TV or go to sporting events.
I got an email on Wednesday last week (Aug 13th) from Eric Tuttle who served a mission in Iceland from 1987-1989. He is an architect in Salt Lake City now and has a website for his business at etuttle.net. The email was sent to me and a bunch of other RM's who served in Iceland. The gist of the email was that the Icelandic mens handball team had just beaten the world champions (their second game and second win) and that if we were interested, we could watch a replay of the match at http://www.nbcolympics.com/video/share.html?videoid=1118451. Well, I watched the match against the Germans, then went back and watched the first game they played against the Russians where they beat them too. Well, once I had watched those two games I really was hooked. So this is the standing for the mens handball team from Iceland:
Russia vs. Iceland = 31-33
Germany vs. Iceland = 29-33
South Korea vs. Iceland = 22-21
Denmark vs. Iceland = 32-32 (both teams advance)
Egypt vs. Iceland = 32-32 (Egypt had to beat Iceland to advance and didn't)
Poland vs. Iceland = scheduled
The game between Poland and Iceland will be played at 12:15am Wednesday morning (tomorrow). If you are reading this late, you already know the score. We hope Iceland can go all the way. You can hear their coach calling the whole game from the sidelines saying, "strákar!" which is the word for "boys." 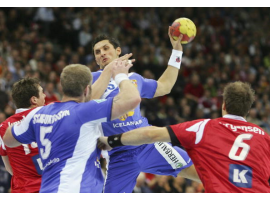 Fun to watch, but since it is not a sport played in the U.S., hard to watch in the U.S. unless you get all the cable channels. "Áfram, strákar!"
Posted by Darron at 6:48 PM

Thanks - that is the first time I have ever seen that type of handball.

For an American, at first glance this type of handball looks like a combination of soccer, basketball and hockey. The ball moves faster than in basketball though, so it is really hard for the goalies to protect the goal.

There is one sport I will watch and that is handbolti. I used to be a golie in High school. Those shots were hard on the hands especially outside on the Icelandic concrete courts hehe. I used gloves in the end. I refused to play unless I was the golie and I was pretty good hehe. It was lots of fun though.

The men on the Icelandic handball team are our heroes! not only did they win the silver but they were welcomed home yesterday by 35,000 people(thats more than 10% of the people here in Iceland) down town, in Reykjavík, after which they were all invited to the Presidents house and awarded the Fálkaorða, which is a great honor. We love those guys!