Missionary Training Center. July 1984 was a long time ago for me. I went into the MTC in Provo, Utah then. I had done a year of college while still living at home in St. George. That year at Dixie was good, but I was ready to be on my way. My mom experienced the traditional amount of emotional trauma when I went out my door at the MTC and they had to go out the other. All I could feel though was excitement. For some their missions come all too soon, but mine didn't quite come fast enough. I suppose some of that was because I thought I was going to a cool place: Iceland.

Who in the world ever goes there.

This first picture is of me and most of the Norwegian missionaries who were in our district. One of my two companions is in the picture as well (I had two). He is Elder Edwin Benson, the one praying over his food (very devout fellow). I am leaning in front of Elder Benson showing you my food, I think. What is strange is that I still remember the names of three of the four guys even after 23 years, even though we only really knew each other for two months. The back left was Elder Muir. The back right was Elder Drumiler. Across from me was Elder Darin Smith. The guy in the foreground on the right--I can't remember his name. I remember Elder Muir was from Myton, near Roosevelt in Utah. Farm town. I saw him once after our missions. He was working at the U-haul center in Provo. Good guys all.
Elder Benson was from Whittier,

California as I recall. He has lived in Utah now I think since he went to BYU after his mission, married and started working. But because they only have a few missionaries at any given time in Iceland, they had to bring three into the MTC one time and so the need for three-somes began to be necessary. My other companion was Elder Thor Christianson from Utah. He and I are shown here in a cave in Iceland when he and I ended up companions in the summer of

1985. He had Icelandic heritage so while he was serving we tracked down some of his relatives and they took us out into the countryside on a two-day trip. Thor is the strapping fellow on my right. I was trying to downplay my wiry studliness in this picture so Thor could feel better about his pitiful "god of thunder" self.
I had the traditional LDS upbringing, with the exception that my dad was a "CES" man. That meant to us that the gospel was studied in depth in our house. Sometimes that was good; other times it was a little hard for us. When I got to the MTC, I went eagerly from one place to another trying to learn as much as I could along the way. One day, after a few weeks of becoming very settled into the very structured routine there, Elder Thor and I were walking to an afternoon or evening class. I hadn't realized it before this day, but I walked fast almost everywhere I went. Elder Thor had noticed this but hadn't said anything for a few weeks. But on this day he was speed walking to class. I sped up but then 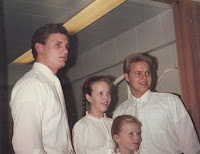 realized he was doing it on purpose. Then he asked me why I had to run everywhere and told me to cut it out. About a year later we were companions and I remember an argument about a hamster too....Hmmmm....He and I both had dads who were CES men but still had come from different backgrounds. We ended up becoming good friends and still see each other once in awhile since we still live in the same town. Strange though. His dad passed away from a brain tumor shortly after his mission--or during--I can't remember. My mom passed away from a brain tumor too just about three years or so ago. They aren't that common. Weird co 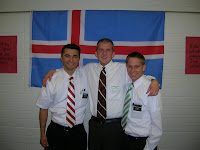 incidence. This baptismal picture is of him and Elder Jensen (from Denmark) in one of our only baptisms while on our missions. Elder Benson, Elder Christianson and I had a good time in the MTC, but were glad to to get to Iceland two months later.
Two new missionaries just arrived in Iceland recently. Elders Higgins and Teodoro, both from Arizona. This picture shows them in the MTC with one of their two RM teachers who served in Iceland, Craig Holdaway. Craig served in 2004.
Posted by Darron at 6:45 PM