Númer trúboðanna á Íslandi (The Number of Missionaries in Iceland)

The number of missionaries in Iceland. I got another old slide photo converted this week to digital from 20 years ago. It is this one at left. I was 20 years old and at the far left. With me from left to right were Elders Hansen, Benson and Worth. I ended up in my career as a university administrator, Elder Hansen is in the construction business, Elder Benson has worked for years as a city planner in central Utah and Elder Worth is a doctor who started with the military and now has a practice in New Mexico. Elder Hansen was my second-to-last companion. We had a blast together and worked hard. I remember we worked a lot on the language together in the mornings. Elder Hansen wanted to learn the language well so we studied a lot of the English rules of grammar so he could learn Icelandic well. The four of us in the picture represent half of the missionaries who were serving in Iceland at the time. My whole mission there were eight missionaries in Iceland at any given time, but that was not always the case.
In the early days of the mission in Iceland (mid-to late-70s) the Geslisons brought their two sons who had both already served missions in Asia and got the work started. As I was looking at the dates of when missionaries arrived and departed (I've compiled a full record of their arrivals and departures), I noticed that early on, there were as many as 16 missionaries 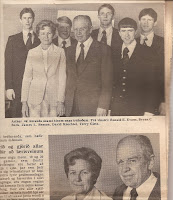 on the island at once. Finding enough places for them all to live was a hardship, as well as paying for things. Since the mission was new, there was plenty to do. But it wasn't long before later senior couples began to see that the island wasn't big enough to sustain a group of missionaries that large. During the year 1980--five years after the mission opened as a sub-mission of Denmark--10 missionaries went home but only four came out to replace them. By the next year the best number of missionaries on Iceland was set at 8 and stayed there for many years. Eight missionaries were able to keep busy. The number on the island at any given time since my years in the mid-eighties has fluctuated anywhere from 10 to 6. Currently there are six there, which seems barely enough to maintain a useful number who can speak the language and do anything that is asked. This newspaper clipping shows 5 of the 16 that were in Iceland during the late 70's with the senior couple, the Hansens.
Iceland has a great bus system.

There were years when the missionaries tried usin 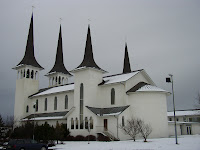 g bicycles to get around, but they were hard to maintain. The weather often was too rotten to ride them anyway, so eventually they always went back to riding the buses. On the left is a typical busstop in mid-Reykjavík right by Háteigs church. I never really used this busstop much. It just happened to be by the church I wanted a picture of. Our apartment at Hátuni was just a few blocks from this church. It has the look of a castle somewhat (which I like) because of its spires. The left picture is from 1984. The right one is from 2 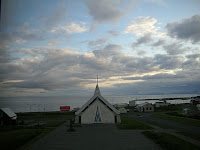 004. You can see a few differences if you look closel

y.
The local churches were usually pretty empty though. The State religion was Lutheran like in most of Scandinavia. Ours, by contrast, was usually full, with little room for more people to join us. A problem we loved having, but had difficulty solving. Our new building from two or three years ago is the last one in this post. The cute little yellow 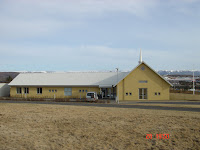 one. It is the first one built especially for us by the Church. It is in Garðabæ, a suburb of the capital, Reykjavík. When you are in it, you feel like you are home.
Posted by Darron at 7:11 PM