Two weeks ago I was invited to help host some university leaders at BYU from the University of Tikrit in Iraq. Four leaders from this university were visiting the U of U and BYU to get a feel for the "best practices" at these schools and to see what it would take to get some of their students into BYU. I was invited to be a part of the hosting group because of my responsibilities over International Admissions at BYU. I met a lot of new people that day, some of whom were from Iraq, but others who were part of the hosting group who I had never met or heard of before.

One of the people I met during the hosting was a BYU employee named D. Morgan Davis who is the Director of the Middle Eastern Texts Initiative in the Maxwell Institute at BYU. We walked back to our offices together when the hosting was over and I asked him about his work. As we spoke, it inevitabley came up that he spoke Arabic and Persian and that I spoke Icelandic. As happens so frequently, Morgan said, "I know someone who served in Iceland!" My response is always, "what is his name? I would know him, or at least know of him." This time around he said that the missionary he knew was Spencer Dodge who was married to his sister, Esther. I told him what I knew about Spencer, that he was a graphic designer and had served in the late 90's and finished his degree a few years ago. He updated me on what I didn't know, which was interesting. Another missionary to Iceland who I knew a bit more about. In case you didn't know I keep a record of all who have served, when they served, where they are now and what they've been up to since their missions. I also have a digital photo album with mission pictures and post-mission pictures of almost every one. This is the picture of Spencer and Esther that I took when they came to our reunion in 2007. 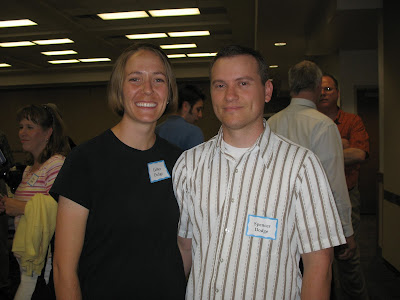 The world--within the Church--is small. Almost every member I encounter who hears about my connection to Iceland has heard of someone who has served there. Spencer is just one person from the long list of lucky ones.
Posted by Darron at 9:20 AM

What great connections you have - all the fun too! Glad we met you at the MTC.

It's nice to discover your blog. I truly love Iceland, having visited there a few times during the last decade on my way to and from Europe. I'm taking my family there for the first time in October. Being a linguist, I took an interest in the language as well, and have studied it on and off for the last seven years or so. It's definitely one of the most difficult languages I've tried to learn. Though I have not met the Wohlgemuths, we were in the same ward as their son, and so heard a bit about the mission from time to time. I also worked with their daughter briefly, randomly enough.
I attended the American branch last time I was there, but I guess this year we will go to the Icelandic meeting, since the US forces are all gone.

Parts of the meeting in the Reykjavik branch are in English and the missionaries do translations for the non-Icelandic speakers wide headsets. All in all, a great experience for any who go. Glad you are enjoying the blog.