The following is the English text from a newspaper article in Iceland today declaring that President Obama has assigned a new ambassador to Iceland: 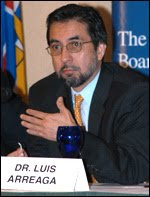 as US ambassador to Iceland. Arreaga holds a doctorate degree in economics and has extensive experience in the foreign service.

"Arreaga has served in US embassies in Panama, Canada and Spain and worked for the US delegation at the United Nations in Geneva. Arreaga has also been involved in projects in Peru, El Salvador and Honduras, Frettabladid reports.

"No US ambassador has been stationed in Iceland since Carol van Voorst left the post one year ago."

It is normal for there to be a lag time between when the US ambassador to Iceland leaves the post and when a new ambassador is assigned, but this gap in ambassadors was longer than normal. I can find no information as to why this was the case. His Spanish skills won't be helpful at all, but I am sure his diplomatic skills are finely tuned.
Posted by Darron at 8:51 AM

The explanation for the delay is the totally atrocious discourtesy shown Ms. Van Voorst by the President's office and the president himself.

The US Foreign Office probably wanted to show that this behavior would not be tolerated - and they were right in doing so.

I'm an Icelander and I absolutely agree with the US on this one. The president (none too fondly known in Iceland as the piglet) owes a giant apology. But - since he is a man who never does anything wrong, and rarely seizes an opportunity to keep his trap shut - that apology is not forthcoming.

The general public, however, was disgusted by his behavior and many have expressed their rage in newspapers, how the piglet could dishonour both Van Voorst and the people of Iceland so. (Honour is, sadly, not part of his vocabulary. During his time as a politician he has belonged to almost every party in Iceland at one time or other.)