Two months ago a 19 year old young man named Eric Ellsworth went into the MTC to begin his mission. He arrived in Iceland this month, July, having not had a companion in the MTC who was also learning Icelandic. 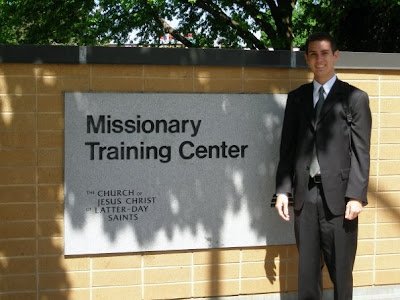 This is one of my pictures of Eric. I discussed his family and history a bit in a previous post. 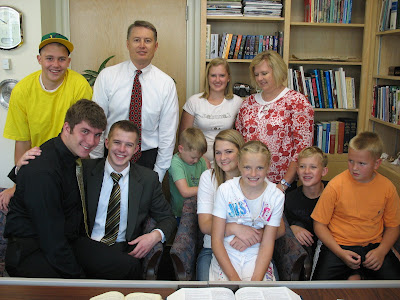 This is a picture of Peter and his family in my office. Peter's dad is a lawyer in Salt Lake and his mother used to work at BYU in the Admissions Office like I do, but before I ever arrived on the scene as an employee. He seems eager and excited about his call to Iceland, though he did seem shocked when he found out he was going to that little spot in the ocean. He and his companion to be are in for a unique and wonderful experience there. Guð blessi þá.

And for those of you who are interested in knowing what grammar texts the University of Iceland is using to teach foreigners Icelandic, you can go to http://www.icelandreview.com/ and click on the "Ask Eyglo" icon at the top. Foreigners can ask questions there about Icelandic life and travel and, if the questions aren't too hard to answer or wouldn't take too much space to answer, they'll be answered. I submitted three related questions about six months ago and the answers finally came up today, July 16th. Both the grammar texts and the best Icelandic-English dictionaries (hard copy and online) are mentioned. This will help me at BYU as I choose which books to use as I teach Icelandic, but might also help others who are interested in learning Icelandic at home from a text or online. Hope these resources help.

And finally, the Icelandic Parliament (the Althing) votes today on whether or not to "begin discussions" about applying for EU membership. Many Icelanders want the benefits which come from EU membership, including a more stable currency, but many do not. Icelanders have always been fiercely independent and a large percentage of the people want to stay that way, in part by staying out of the EU. Two years ago NATO closed its military base in Iceland, last year Iceland's banks collapse and now Iceland is discussing EU membership. A lot can happen in a very short time.
Posted by Darron at 9:55 AM

Just so you know - Elder Ellsworth is with us in Selfoss. We are excited to work with him. Elder Smith is his trainer - great Elder.

I stumbled on your blog because I was looking for a TV segment that was done with my son in Iceland last week. It was on Missionaries in Iceland. It was an eight minute segment in Icelandic, of course! I guess it is not posted on youtube, but is out there somewhere. Our son Nicholas will return from Iceland in 11 days with his original companion in the MTC. Both live here in Arizona. It has been an amazing and unique mission.

It was fun to read of your experiences in Iceland and teaching Icelandic. Nick will be at BYU in a few weeks. I will tell him to look you up.

It was also fun to see pics of the new missionaries I have only heard about on the missionary moms site and from my son.

Sally, I meet Nick in Iceland officially when he was fairly newly arrived in Iceland. I could tell he was humble and a hard worker. Please do tell him to come and see me when he arrives at BYU. I start teaching Icelandic 101 in two weeks at BYU. Nick could come and be a guest "speaker".

I have a question. Does Iceland have two mission couples? One in RVK and one in Selfoss.

Iceland does have two senior couples now, one in Reykjavik and one in Selfoss, each specifically assigned to that area but working closely with the senior couple in the other area. It was the first time since the 80's--when the Hansens and Geslisons were both serving at the same time--that two couples were serving at the same time and had a significant number of overlapping months.

Say Hello to Elder Teodoro for us. He is a great Elder and we miss him.

We had 2 great Danish Elders here for the past month as we have waited for our two new Elders who arrive tomorrow. They were great!