My dictionaries. While I was in the MTC, I remember asking my teachers where I could get the best set of Icelandic-English and English-Icelandic dictionaries for my mission.

Remember, this was 23 years ago. We were given one of those little pocket dictionaries in the MTC, but I knew there had to be much better dictionaries in Iceland that I could find or order. I was told to wait until I got to Iceland to buy the dictionaries, so I did. When I arrived my trainer Dale Tanner (who is in this first picture and got a little carried away with the whipped cream) told me that all the missionaries start looking for their dictionaries by going into the old book stores all around Reykjavík and asking the owners if they had any dictionaries by a man called Geir T. Zoëga. 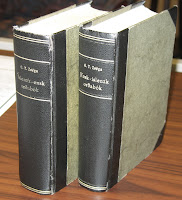 Those were the coveted dictionaries and any missionary who had found a matching set was worshipped, or at least his dictionaries were worshipped. I'm not quite sure why we coveted these particular dictionaries so badly, especially because, since that time, some really nice dictionaries have been published that are far better with modern English equivalents than these had. The Zoëga dictionaries were published between 1900 and 1925, but we couldn't find anything better in our day. I still keep my Zoëga dictionaries in my office at BYU, but I bought a new dictionary in 2004 when I visited Iceland again for the first time since my mission. The missionaries in 2004 said that this new book was the best in its class. It cost the equivalent 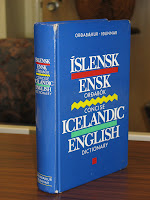 of $80 and has been worth its weight in gold. I used the Zoëga dictionaries for the first 18 years that I was home from my mission. I did some translating for a BYU religion professor and helped translate for General Conference for the four or five years that they did it in Salt Lake City. I used them to help me write letters and translate old Spanish Fork Icelanders' letters home to see what they had been saying to their family members back home. The problem with the dictionaries wasn't the Icelandic, but the English. It was all turn of the century English equivalents to the Icelandic words and wasn't as helpful to us who were trying to learn Icelandic in the 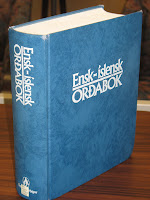 mid 1980's. When I got this new blue dictionary, all those old Zoëga problems went away. The book was perfect for those who are learning Icelandic today. Each word had phrases attached to the definition along with showing how the verbs and nouns were inflected if they were unusual. The blue one was only an Icelandic-English dictionary and did not go the other direction, but that problem was solved a few years back too. BYU had a copy of a $250 English-Icelandic dictionary that came out while I was in Iceland in 1984. None of us could afford it though back then so we just used the Zoëgas then. I have permanently checked this one out from the library and no one has recalled it in years (go figure).

In the end though, in the absence of having a native Icelander standing next to me every day, I have these dictionaries which, altogether, give me more Icelandic than I could ever use in my conversations and letters to people. I'm sure glad there are some very educated Americans and Icelanders who put all these together. Makes it possible for the rest of us to more fully interact with the great and varied people of that far away land.
Posted by Darron at 1:40 PM

I bought one of those $250 babies while we were there, remember? The bookstore had a finance plan, and I paid it off over the span of my mission.

Still have my Zöega´s too......The whipped cream was taken at Víðir and Klara´s apartment shortly after they were married. Steve Andersen and I were getting ready to fly home in a day or so after this picture.

I still have my Zöega dictionaires in a place of honor on my bookshelf. I served from 1980-1982 and there was NOTHING to compare with my little books. As you said, I found them in an old bookstore on Ingolfstræti in August 1980. They were old and the covers were ripped. They cost me about $20 and another $25 to have them rebound. The Bindery did an outstanding job and they are still beautiful today. They are not a matched set. The Íslensk-Ensk is from 1922, published by Sigurður Kristjánsson, 2nd edition, and once owned by Jason Sigurðsson. The Ensk-Íslensk was published in 1945 by the same publisher, 3rd edition. The endpaper was missing so I don't know if there was a previous owner. Even as old as they were, they were better than any other dictionary we could find.