Spanish Fork, Utah was the place to be this week if you have the blood of an Icelander or two in your veins. I've never found my one or two Icelandic ancestors (yet) but spent parts of Friday and Saturday in Spanish Fork just the same.

On Friday night I gave a lecture on the history of the settlement of Iceland and the development of religion there since the settlement. Basic summary of the lecture:

870 - 930 A.D. - Settlement period in Iceland
870 - 999/1000 A.D. - Paganism ruled in the land
999/1000 A.D. - Catholicism replaced Paganism as the religion of the land at the "request" of the King of Norway who was a Christian convert
1551 - Lutheranism becomes the state religion after the beheading of a few Iceland Catholic leaders who were against the idea.
1551 - present - Lutheranism is the State religion
1850 - Two Icelanders hear of the restored gospel while in Denmark in school and are converted
1851 - First two baptized Icelanders return to Iceland as missionaries
1854 - 1914 - Four hundred and ten Icelanders emigrate to the U.S. after joining the Church.
1914 - 1974 - All formal LDS missionary work and immigration of Saints halted
1975 - Formal missionary work begins again in Iceland through Byron & Melva Geslison

On Saturday in the city park in Spanish Fork, all the western Icelanders and a smattering of returned missionaries showed up for the festivities. I got to eat a few Icelandic hot dogs, thanks to Rick Mathews. I took pictures of all the returned missionaries who were there for your viewing pleasure: 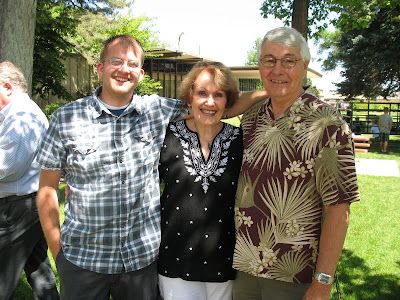 Shirl and Mary Holt served in 04-05. They are standing with one of their missionaries, Craig Holdaway who served from 03-05. 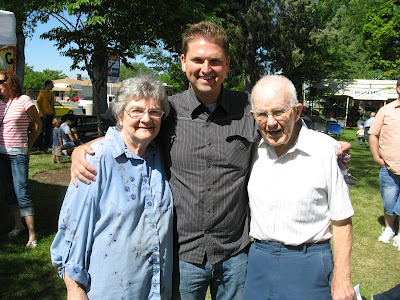 Ray and Sally Anderson who served from 99-01. They are standing with one of their missionaries, Travis Hoban. 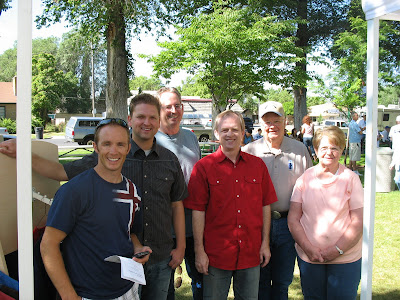 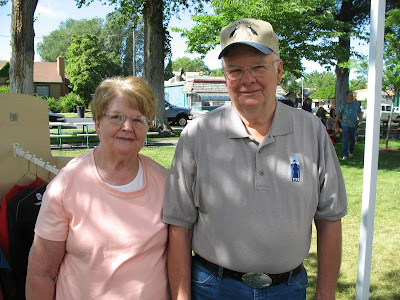 A final shot of Bro. & Sis. Ashby. They returned home early from their mission three weeks ago because of health problems that Bro. Ashby was experiencing. Many have asked how he is doing since his return. I am happy to report that he has been seeing his doctor and is doing much better. Brother Ashby is of Icelandic descent and he and Bonnie were sad to return home earlier than planned.

All in all, it was a fun weekend. So many good people living in Utah who are of Icelandic descent and who love their Icelandic heritage. Happy to be a part.
Posted by Darron at 11:08 AM

I have wanted to go to Iceland since I was a little girl. The problem is that my husband does not want to go. I am 47 and LDS and would like to find someone who may want to go with me. I have no idea where to start because the travel sites are not LDS and I don't want to go with someone who isn't LDS. I have reading you blog off and on with great interest. Do you have any ideas?

msroxie: Send me your direct email address and we can talk about options. I have some ideas and some contacts that might work for you!

I was just wondering. Do you have any idea how many children of Icelandic members who are from Iceland have gone on missions since The Geslisons arrived.
I suppose I should say offspring of members who were baptized after the Geslisons came to Iceland. Second generation members perhaps.

I've often wondered that myself, Hera. I bet Guðmundur & Valla with the help of Ólafur & Björg would be able to put together a list like that.

Hello Darron! I am a graduating Chemistry student living in Arizona, I'm LDS, and I really want to attend graduate school in Iceland. I was trying to find contact information for branches or wards in Iceland when I found your blog. Could I also give you my email so that I could ask you some questions?
Contact me at chrisrcalvert@gmail.com if you want! Thanks! And I love reading your blog, I want to live in Iceland so bad!