In 1902 a book was published by Prentsmiðja Þjóðólfs called (in English) "A Call to the Kingdom of God". It was written by an Icelander by the name of Jón Jóhannesson, one of the original 20 or so Icelanders who had joined the Church, emigrated to Utah and then returned to their homeland to serve a mission. Jón had a considerable command of the history of Christianity and spends a great deal of time reviewing this history. The following is a quote from his book which I have translated from the Icelandic. He used this book, along with the Book of Mormon, to preach the gospel during his mission. How he would have loved to have an Icelandic Book of Mormon in his day! He said:

"We read also in Matthew 24th ch. 9th - 13th v., where Christ was continuing to warn his disciples concerning these false prophets, and tell them about the afflictions they would experience, he told them that they would be sold into bondage and have their lives taken, and all nations would hate them for his name’s sake, and how clearly we find this prophecy is fulfilled, that they were faithful through persecutions, they were captured and taken bound into dungeons, and within about 32 years after the Savior’s ascension, the first major laws of persecution were put in place against them: they were driven, afflicted, tormented, and in the end all were killed within 100 years of Christ’s birth, except John the revelator, who was exiled to the isle of Patmos, from 93-96 A.D."

Jón goes on to tell how each of the Apostles were killed, each faithful even unto death.

We who have served in Iceland more 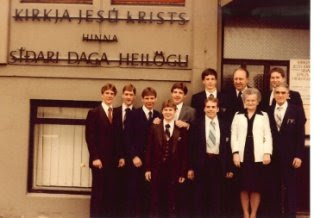 recently sometimes forget or know little about those who served as missionaries before us there from the 1850's to right before WWI. I'll add a few quotes from his book from time to time. These paragraphs provide an interesting perspective about the teachings in those days which contributed to many baptisms and a great deal of emigration.

Many have gone before.
Posted by Darron at 10:23 PM

It's good to see a post again! Must mean you are really busy with teaching! Hope all is well! Hope your Thanksgiving went well and may the Christmas season go well too!

I remember when Miriam my daughter did a paper on The Icelandic LDS pioneers. She wrote it when she was in IB in MH. She found some written accounts by those missionaries on a microfilm. They were persecuted greatly in Iceland by their own countrymen. It is touching to read their deep sadness of proplr not wanting to hear of the gospel.