Why is it that some pictures cause such strong feelings or emotions when we look at them? Is it because our minds and heart can do such a good job of "filling in the blanks" when a really powerful picture is taken and we place ourselves there?

This first picture looks like it could have been taken with black and white film. 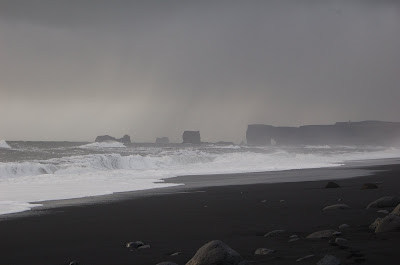 It wasn't though. For me it is extremely easy to imagine being there. The mist. The wind. The freezing water and air. The desire to take it all in, while at the same time wanting to head for shelter. This picture was taken on the southern coast of Iceland a few years ago. The original Vikings would be out in open boats on the open seas in weather like this and not think anything of it.

I've been reading Egill's Saga recently (for the first time ever). I am about one third through it and am amazed at how the elements didn't frighten them like it might you and me out on the open sea, or even close to land like in this picture. That they sailed in open boats too amazes me.

I spent my early years from age 6 to 12 in Tallahassee, Florida. My father had a friend who we went to church with who regularly went deep sea fishing in the Gulf of Mexico. He took us along on occasion. We would leave at 5am and head out to sea three or four miles. Then we would trawl for King Mackerel or Hardtails. I thought seeing the fish come in on the lines was cool as a young kid, but the sea scared me to death. And then to be seasick often on top of that. And the Gulf of Mexico waters were warm! These Norwegian/Icelandic vikings must really have been tough. 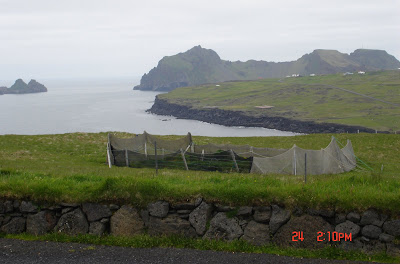 I think I would want to stay in an area like this last picture from the Westmann Islands just off the south coast of Iceland. This picture evokes a lot of emotion for me as well. Imagine that being your backyard....
Posted by Darron at 12:34 PM

Enjoyed your webpage and photos of Iceland. I have ancestors from there and am a member of Icelandic Assoc. of Utah. Will be doing a presentation at the next Icelandic Days June 21, 2008 in Spanish Fork. Enjoyed your site. See my ancestor's histories at www.geocities.com/famhistory/icelandicgen.html
My husband and I live in St. George now. Lin Floyd

I grew up in St. George down on 700 south. We lived on the corner where you turn to go to the Jr. High. I haven't been back for some time. I will be at the Sunday night fireside for Icelandic Days. Usually we missionaries try to do something to contribute during the festivities. Would you mind me including any of your Icelandic family history stories on the blog if I find a good one?

Darron,
We leave on the 12th. Will let you know how it goes....Will have plenty of Blog material when we return.